Purr by Katy Perry, is the singer's first celebrity fragrance launched November 2010 by Gigantic Perfumes. Available in 30ml, 50ml, and 100ml EDP and body products. "I really wanted to develop a scent that was completely unlike anything I'd smelled before and not one that smelled like a knockoff of another scent," says Katy Perry.

Beauty Talk: Katy Perry
Tell us about your new fragrance, Purr:
"I'm a big fan of gardenias, but I wanted the scent to be unique, so we added coconut and jasmine. It's not as sugary as what I wore when I was younger, and not as concentrated as the stuff you smell on older women."

So it's purr-fect for you right now?
"Yes! I love the play on words. I wanted to name the perfume All Things Cute because the bottle is so adorable, but we went with my love for kittens instead." --Katy Perry

Who's Your Scent Soul Mate?
Playful like Katy Perry: Pick a scent that's as adventurous as you are! Unique notes like bamboo mixed with bubbly apple and girly freesia will show everyone how much fun it is to be around you.

Others: Because of You by Jordin Sparks, Heat Rush by Beyonce, Reb'l Fleur by Rihanna

Cosmo Promo
Purr: Katy Perry's signature scent Purr comes in a cat-shaped bottle, complete with jeweled eyes, metallic accents and opulent lavender coloring. The perfume, like Perry herself, is playful yet sophisticated. Katy Perry transcends barriers with her music and so does her new fragrance, Purr. Available at all Nordstrom locations. katyperrybeauty.com

In the Bag: Katy Perry
Katy Perry, the retro-fabulous Teenage Dream pop star - and newlywed! - shares the colorful items she can't hit the road without.

Purr by Katy Perry perfume
"I wanted this scent to be fresh but not as light as a spritzer and not so concentrated that one squirt would knock people out. This is perfect - as you walk by, you leave a trail of mystery." --Katy Perry

AFFILIATE LINKS. (As an Amazon Associate I earn from qualifying purchases.)

Stay up to date with the latest celebrity perfumes with our newsletter. 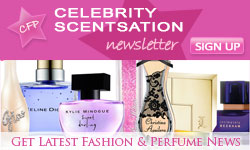